The cultural, religious and tourism value of Sri Lanka’s elephants are somewhat understood, but did you know that Sri Lanka’s wild elephants could also be a key tool in fighting climate change?

A recent study done on African forest elephants has shown that forest elephants are “environmental engineers”, creating forests which are better at capturing carbon from the atmosphere. Sri Lanka is fortunate to have elephants still living in our forests, and they are a huge asset to the local tourism industry but these majestic animals are endangered and need protecting.

Elephants are a natural resource providing many environmental, economic and community benefits

Elephants play an important role in any ecosystem they live in, and are referred to as a “keystone species”. Their existence ensures the survival of not only other wildlife species but also of certain plant species. Although the population has drastically decreased since the 1800’s, the number of wild elephants in Sri Lanka is estimated to be around 6,000 and these animals provide an invaluable service to our environment as well as our economy. The Gathering in Minneriya, which is the largest predictable gathering of Asian elephants in the world, is estimated to bring in over LKR 4 billion in tourism benefits to the national economy.

Adding to the list of priceless services already being offered by these giants of the wilderness, according to a recent study, forest elephants could also be a game changer in fighting climate change! Elephants have always been known to be ‘environmental engineers’ thanks to the varying roles they play in helping trees to spread their seeds etc but now its been identified that elephants play a critical role in helping a natural ecosystem become richer in larger-trees, which essentially have a higher capacity to capture carbon dioxide from the atmosphere. The study, which focuses on forest elephants in Africa, concludes that forest elephants can increase the amount of carbon stored within a forest, by tilting the biological balance in favor of certain types of trees. Due to their large body-mass, elephants need to eat massive amounts of food to sustain themselves, so they are continuously foraging throughout the day, which means that they dramatically reduce the density of the vegetation wherever they go. While they move through the forest, they step on young saplings whilst eating others and in that process they help ensure some of the trees become better at carbon-capture by enabling them to become bigger and taller, by removing other younger trees competing with them for space, water, and light. 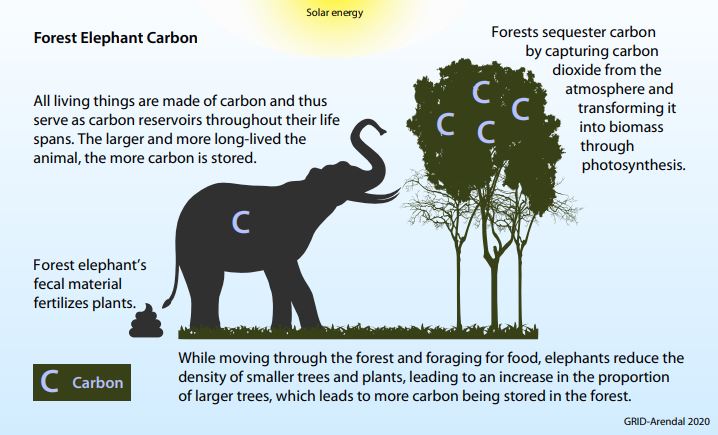 Climate change poses a serious threat to Sri Lanka’s future. Rising sea levels will mean that many of Sri Lanka’s beach tourist destinations may become impacted, including hotels and other infrastructure. Rising temperatures may discourage travellers from visiting tropical destinations which will become increasingly warmer.

Being a tropical island, Sri Lanka has many natural tools at our disposal which we can leverage to fight climate change, like tropical rain forests and mangrove ecosystems. It is encouraging to learn that forest elephants help create forests that are better at capturing CO2 from the atmosphere and this is yet another reason why Sri Lanka must do more to protect our wild elephants.

Sadly elephants are facing unprecedented danger in Sri Lanka.. Ranked as being the country with the worst human elephant conflict in the world, an average of 300 – 400 are killed in Sri Lanka each year and so this majestic species loved by people all over the world, is facing the threat of extinction in the wild, here in Sri Lanka. The plight of Sri Lanka’s wild elephants could change significantly if only the priceless services these forest elephants provide were more widely understood.

“The secret work of elephants’ ‘ study goes on to explain a fantastic method of placing monetary value on natural resources, such as wild elephants, in order to provide them more protection in the wild. “Debt-for-nature swaps” which is an initiative by the United Nations Development Programme, is a system whereby a developing country, such as Sri Lanka, can negotiate a reduction in the country’s debt, in exchange for a commitment to protecting local natural resources, which provide benefits not only locally but also globally. The money Sri Lanka saves through this swapping arrangement can then be applied towards the conservation of resources which have international value – such as elephants, whilst also helping build markets such as tourism, which can also provide job opportunities and other community benefits.

The Covid-19 pandemic has been a wakeup call for us all and we now know that exploiting natural systems can and will have disastrous consequences. Building and protecting healthy rainforests, jungles, mangroves and protecting biodiversity such as elephants, can generate a much more sustainable economic system,and long term benefits to all.

check out our recent article highlights a serious issue in Minneriya national park affecting the wild elephant populations in that region.