SRI LANKA – HOME TO THE LARGEST ASIAN ELEPHANT GATHERING: but for how long?

‘The Gathering’ which occurs in Sri Lanka’s Minneriya National Park, is the world’s largest congregation of Asian elephants in the wild.

ISSUE: One of the ‘Wildlife Wonders of the World’, The Great Elephant Gathering of Minneriya National Park, is at risk due to human interference in an age-old natural system. The grasses that emerge on the Minneriya tank-bed in the dry season, which elephants gather to feed on, are lately being submerged as the tank is now used in the dry season to store water from Moragahakanda, to transport for agriculture in the East.

IMPACT: In 2018 the tourism benefits from The Gathering were over ~ Rs. 4 billion The spectacle of large groups of elephants is receding and the major tourism attraction is disappearing.

SOLUTION: The water levels of Minneriya must not be manipulated during the dry season. Irrigation experts must develop a more sustainable method of transporting water to the East, which does not jeopardise the tourism and community benefits from this high-profile wildlife event.

Please sign this petition to support The Gathering so it can continue for generations to come, to sustain the Sri Lankan economy and provide livelihoods for locals, while providing an essential food source for elephants, an Endangered Species in Sri Lanka.

In 2018, at its peak, Tourism earned Sri Lanka US $4.4 billion (Source: Oxford Business Group). In addition, in 2017, according to The World Travel and Tourism Council, tourism generated 404,000 direct jobs for the people of Sri Lanka, equal to 5.1% of national employment.

Sri Lanka has always been famous for its abundant natural beauty. In addition to the lush tropical jungles and forests, lakes and rivers, the country is home to an incredible diversity of wildlife including leopards, bears, whales, birds, reptiles and, of course, elephants. Thanks to this, all packed into a small island with good tourism infrastructure, coupled with its strategic position in Asia, Sri Lanka has made a name for itself as one of the best wildlife tourism destinations in the world.

THE “GATHERING” – One of the Wildlife Wonders of the World

Each year, during the dry season, Minneriya National Park attracts what Lonely Planet refers to as “One of the 10 Greatest Wildlife Wonders of the World”. Beginning in May, large numbers of elephants gather on the grasslands of the lake bed at Minneriya, numbering as many as 400 at its peak, from August to September, in what has been termed as ‘The Gathering’. It draws millions of local and foreign tourists to the Park each year.

Dr. Sumith Pilapitiya, former Director General of the Department of Wildlife Conservation, and one of the country’s leading elephant researchers, has been studying ‘The Gathering’ for many years and has concluded that the elephants come in their number in search of, not water, but of the lush new grasses of the lakebed, as they have a higher protein content than mature grasses. With the release of water from the reservoir at the start of the dry season, for the irrigation of agricultural lands, grasslands emerge on the exposed lakebed and, with it, come the elephants. The inviting waters of the Minneriya tank are just a bonus for them, and they make good, and entertaining, use of it.

The elephant herds disperse again once the dry season ends, and the rains of the north-eastern monsoon begin to fill the reservoir once more.

In addition to The Gathering, Minneriya is also famous for the first record of twins in the wild among Asian elephants. Images courtesy of Mr Rohan Wijesinha & Dr Sumith Pilapitiya

MORE THAN JUST A ‘GATHERING’

Dr. Pilapitiya observes that ‘The Gathering’ is not just a place to see elephants in large numbers but also one of the best places to observe “unique natural biological behaviours of elephants”, which are rare and highly valued occurrences not just for researchers, but also for wildlife lovers and photographers. 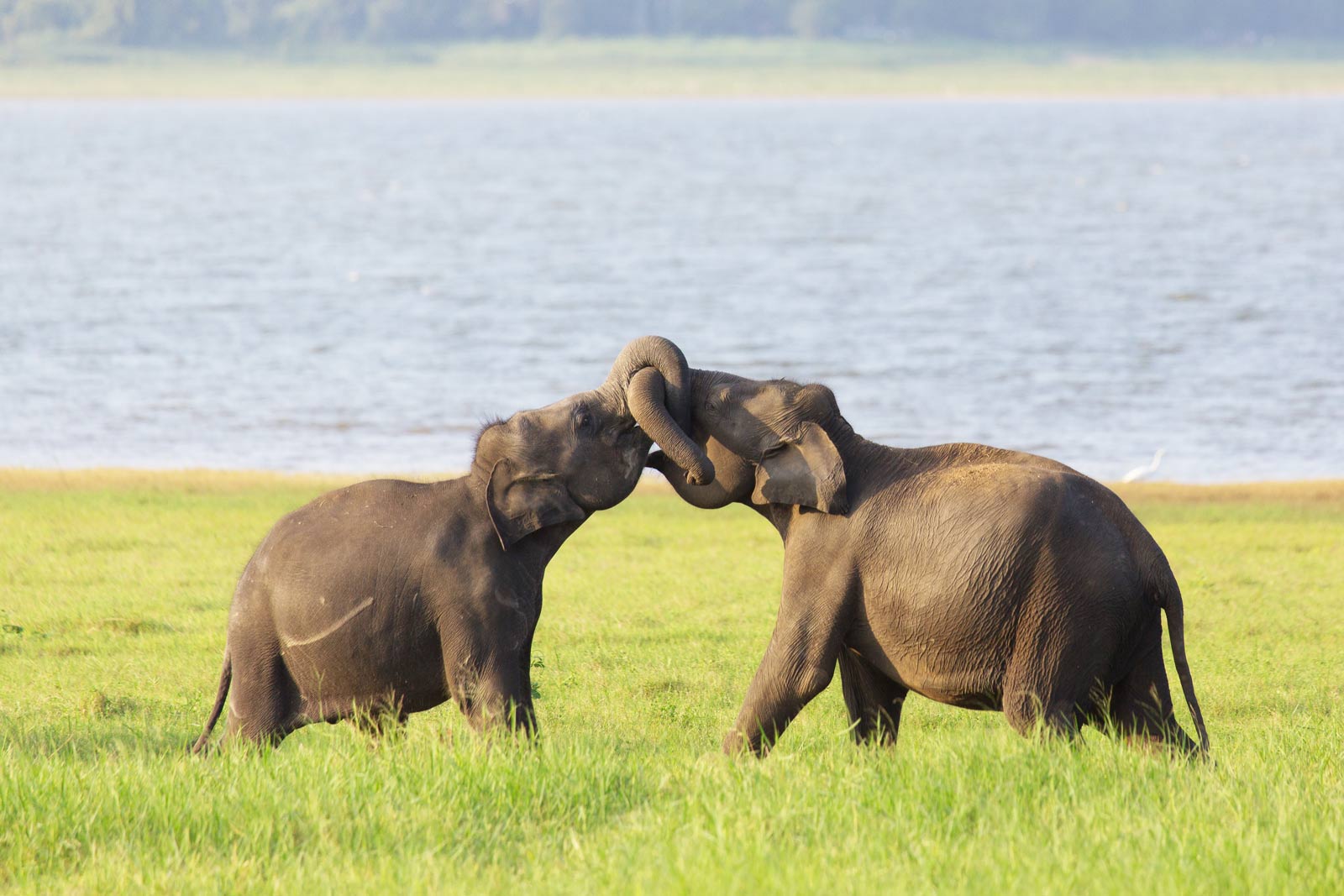 Minneriya is an ideal place to observe and photograph unique elephant behavior. Image courtesy of Dev Wijewardane
“Minneriya is the best site not only to observe large herds of elephants but also a unique location to see interesting elephant social behavior. There is no other such site among the 13 Asian Elephant Range States and has been a magnet for attracting tourists, foreign and domestic, in their thousands.”
~ Dr Sumith Pilapitiya, Former Director General of Sri Lanka’s Wildlife Conservation Department (DWC)

ALL ABOUT TO END? 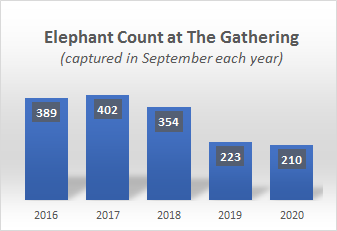 This has resulted in ‘The Gathering’, once of 400 or more elephants at a time, transforming into scattered groups of barely 200, at the most; no longer the ‘spectacle’ it once was, but one that can be observed in other Asian countries as well.

The appeal of The Gathering will diminish along with the reduction in elephant numbers. Scattered groups of 100 – 200 elephants can no longer be called a ‘wildlife spectacle’ as it happens in other parts of Sri Lanka as well as in other countries. Image courtesy of Dev Wijewardane. 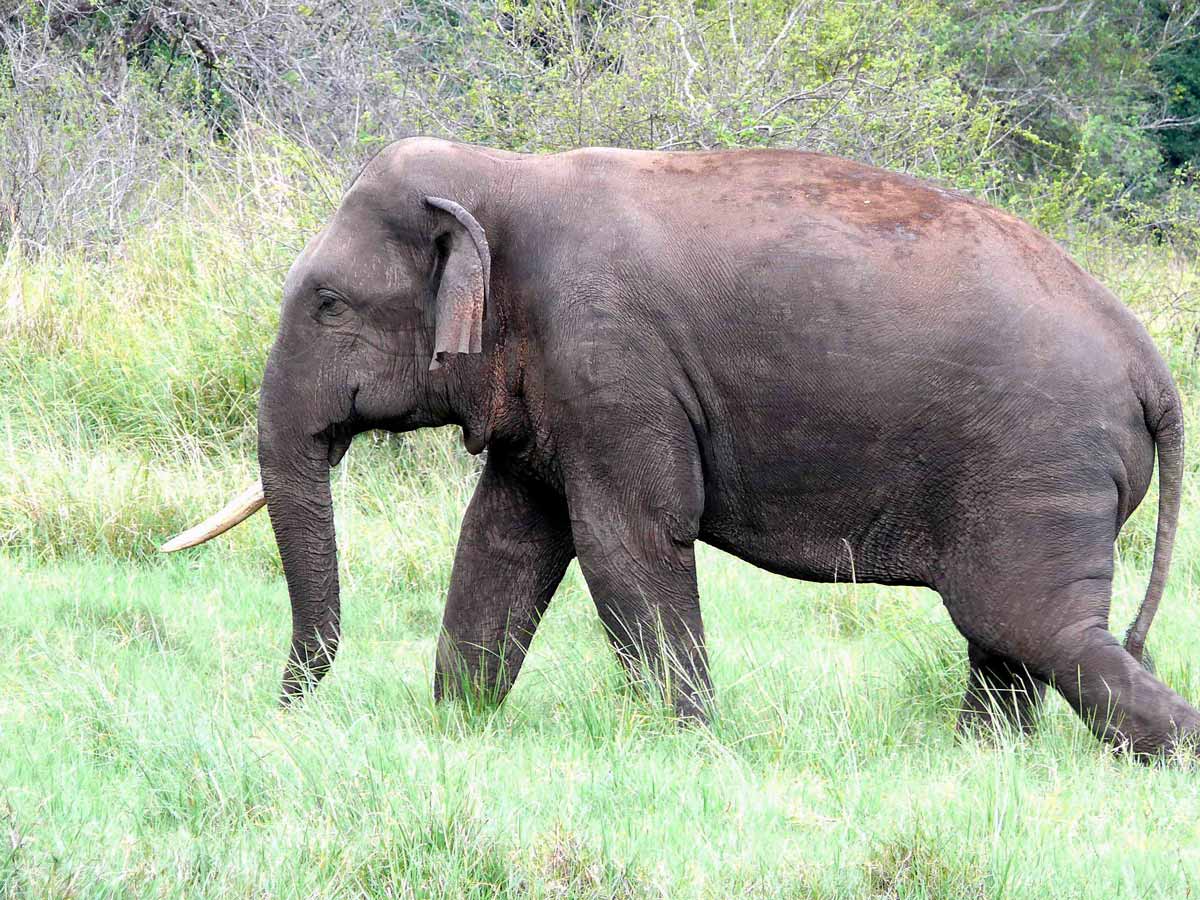 Along with the large numbers, some of the ‘rockstars’ amongst the elephants have also begun to gradually disappear.
‘One Tusk John’ has been missing from The Gathering for a few years. Image courtesy of Srilal Miththapala

WORTH ITS WEIGHT IN GOLD

As per a study undertaken by Srilal Miththapala, founding member of Sri Lanka Tourism Alliance, back of envelope calculations estimate the total economic worth of The Gathering to be well over ~ Rs. 4 billion or US$ 22 million, in 2018.

Disrupting the natural cycle will only result in the country losing Rs. 4 billion in tourism benefits to the National economy each year. No agricultural project irrigated with water from Minneriya, during the dry season, will contribute to even 1% of the present economic value of ‘The Gathering’.

Owing to the popularity of The Gathering, Minneriya & Kaudulla National Parks combined, rate as the #2 Wildlife attraction visited by tourists each year, second only to Sri Lanka’s premier wildlife destination, Yala National Park (Source: Sri Lanka Tourism Development Authority). Furthermore, The Gathering is on the travel itinerary of just about every foreign tourist visiting the island during the 4-month period between June and September. It benefits not only the ticket sales of Minneriya and Kaudulla National Parks, but also the incomes of many others including safari jeep drivers, hotels, eateries and even the roadside fruit and king-coconut sellers, who manage to make a few hundred rupees to feed their families for the day, from the tourists who stop by.

Any threat to the survival of ‘The Gathering’ will have severe consequences not only on Sri Lanka’s position as one of Asia’s best destinations for wildlife tourism, but also on its local and National economies.

The visitor numbers at Minneriya & Kaudulla have been on an upward trajectory due to the popularity of The Gathering. Souce: Sri Lanka Tourism Development Authority (SLTDA)

THE WAY AHEAD – sensible collaboration between Government Departments and Tourism Stakeholders

‘The Gathering’ is too important to lose. Along with the elephants, it would wipe out vast amounts of FX revenue and thousands of jobs from the local economy.

With the construction of the Moragahakanda reservoir water is released to Minneriya during the dry season for irrigation in Kantale and beyond. These unseasonal water releases, submerge the grasslands that are used as fodder by the elephants which is the cause of the current disruption to The Gathering. Due to reservoir elevations, Minneriya needs to be filled to 70% of its capacity for gravity-flow into Yodha Ela, which then transports the water to the East.

Sri Lanka’s competent civil and hydrological engineers should be consulted, to develop a better solution to feed the Minneriya water to Yodha Ala, instead of having to maintain the tank’ water levels at 70% capacity, so that the irrigation needs of the East can be met without jeopardizing the tourism benefits of The Gathering. A cost benefit analysis should be conducted on the project to include the opportunity cost to the Sri Lankan economy of losing The Gathering.

In order to protect the future of ‘The Gathering’, a National Policy must be developed for Minneriya, where Sri Lanka’s Agriculture, Irrigation, Tourism as well as Wildlife Conservation Departments collaborate to meet the needs of all involved, so that the Minneriya tank can be better managed for everyone’s benefit.

PROTECT THE FUTURE OF TOURISM IN SRI LANKA

Under the weight of the economic burden stemming from the Covid-19 pandemic, agricultural needs of the population have rightfully taken center-stage right now. However, once the pandemic is brought under control, international tourism will resume. Sri Lanka must not forget the country’s tourism potential by destroying the very things that attract tourists to our shores.

Being a country featuring predominantly ‘nature-based tourism’, Sri Lanka’s tourism industry and operators can and should play a vital role in the conservation of Sri Lanka’s nature and wildlife; as the future sustainability of the industry hinges upon it.

The Gathering of elephants at Minneriya, as well as all wildlife, have an enormous economic potential for generating much needed foreign exchange revenue for Sri Lanka and we must protect these important elements of our Natural Heritage as economic assets of national importance.